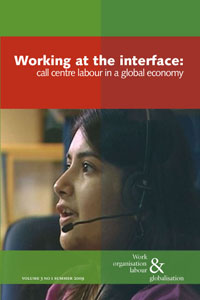 Working at the interface: call centre labour in a global economy

Call centres illustrate the consequences of globalisation for labour perhaps more clearly than any other form of employment. Call-centre workers sit at the interface between the global and the local, having to transcend the limitations of local time zones, cultures and speech patterns. They are also at the interface between companies and their customers, having to absorb the impact of anger, incomprehension, confusion and racist abuse whilst still meeting exacting productivity targets and staying calm and friendly. Finally, they take the brunt of the conflict at the contested interface between production and consumption, having to deal in their personal lives with the conflicts between the demands of paid and unpaid work. Drawing, amongst others, on organisational theory, sociology, communications studies, industrial relations, economic geography, gender theory and political economy, this important collection brings together survey evidence from around the world with case studies and vivid first-hand accounts of life in call centres from Asia, North and South America, Western and Eastern Europe. In the process it reveals many similarities but also demonstrates that national industrial relations traditions and workers’ ability to negotiate can make a significant difference to the quality of working life in call centres.